How much caffeine in a cup of coffee? The extensive guide

Have you ever wondered how much caffeine is in a cup of coffee? We've done the research, and the answer is not as straight-forward as you would expect.

We spent a silly amount time researching this topic and found a lot of conflicting information. So we decided to dig deeper and find the real answer to this question.

One thing we noticed immediately is that this is a complex topic. We’ve broken it down into the following sections. Click the section you’re interested in finding out more about.

If you are thinking about the impact that caffeine has on your health, always consult your doctor first. Keep reading to find out more about how much caffeine is in a cup of coffee.

Let’s first set some standard units of measurement so that we can find out how much caffeine is in a cup of coffee.

Cup – We’ll be referring to a cup as 8 oz., or about 240 ml.
Caffeine – We’ll be measuring this in milligrams (mg).
Ground Coffee – This will be measured in grams (g).
Percentages – Some sections of this article may refer to percentages.

For example, if Coffee A has 5% caffeine and we want to make 8 oz. pour-over coffee, we’ll use the generally regarded 14:1 ratio. This means that we’ll need about 17 g of ground coffee for our 8 oz. cup, which means that there will be an estimated 850 mg (0.85 g) of caffeine in the resulting coffee.

Don’t worry if you’re not good at math, we’ve done all the work for you!

Coffee beans impact how much caffeine in a cup of coffee

Here’s a quick breakdown of how the coffee affects the caffeine content:

Things that affect the caffeine content of coffee include the altitude at which the coffee was grown, the soil in which it was grown, how the beans were harvested, how they were roasted, a fly sneezing in the general vicinity, etc.

Anything from the day the tree was planted until the day the coffee reached your lips could have had an effect. Let’s take a look at the biggest variable, the species of coffee that we drink.

There are many coffee species grown around the world. The two types of coffee produced and drunk are Arabica and Robusta. Robusta usually has between 2.2% – 2.7% caffeine, while Arabica has about 1.5% caffeine.

Arabica is generally understood to have a more versatile and pleasing taste profile. Robusta’s taste is usually described as acrid, burnt, and rubbery. One of the main reasons for this taste difference is the caffeine content.

Robusta has more caffeine than Arabica does. Caffeine has a bitter taste which makes it quite unpleasant to drink. Robusta bears the burden of this in its taste profile because of its higher caffeine content.

Robusta coffee is usually used as part of a blend, or most commonly in instant coffee. Arabica is usually used for espresso-based drinks and alternative brewing methods.

The origin of a coffee bean does seem to affect the caffeine content, although only slightly. Coffee grown at higher altitudes has, on average, 18.72mg more caffeine per cup of coffee.

Through our research, we found that caffeine content in coffees from different origins can be affected by altitude, light, nitrogen in the soil, among other things.

Arabica coffee grown above 1200 m had higher caffeine content than beans grown lower than 1000 m. This is according to finding by Ribeiro et al. (2016) [9]

This is a small, but still an interesting difference of about 5 grams per cup of coffee.

Now, in case you’re wondering what’s keeping the pests off of your organic coffee, that’ll be the caffeine itself. Yep, that’s right; caffeine acts as a natural pesticide.

There is a difference in the amount of caffeine content in dark vs light roasted coffees, but again, it’s tiny and negligible.

Sources we found online say that light roasted coffee has more caffeine than dark roasted coffee. Yet, according to a study conducted by Han (2009) [6], those sources might be wrong.

Dark roasted coffee has more caffeine than light roasted coffee. Although again, we’re talking about a 7 mg difference here (for an 8 oz. cup of coffee).

Further results from the same study showed another reason why coffee made with dark roasted coffee grounds contains more caffeine. The longer coffee beans are roasted, the less dense (and lighter in weight) they become.

“Caffeine is an alkaloid that is thermally stable” [8,10]. Meaning, the amount of caffeine stays almost the same whether roasted light or dark.

So, we’re using more dark roasted coffee in the 17 g, and the caffeine content is almost the same as light roasted. This means that we’re using more coffee grounds (and by nature, caffeine) to make one cup of coffee.

A few studies have been done to test how grind size affects the caffeine content in coffee, but the results are inconclusive.

Forced to answer, a finer grind size allows for more caffeine extraction, but not always.

A study by Derossi et al. (2018) [4] tested fine, fine-coarse and coarse grinding degrees. They tested this through espresso, Turkish coffee, and American coffee. They found that coarse coffee grounds extracted an average of 70 mg (per 8 oz. cup of coffee) more than the fine coffee grounds.

A study by Andueza et al. (2003) [1] tested the three grinding degrees but only with espresso. They found that the fine coffee grounds extracted about 180 mg (per 8 oz. cup of coffee) more than the coarse grounds.

The results vary quite a bit. What’s important to remember is that the grind size is directly related to the brewing method. This impacts the taste, aroma, and overall enjoyment of the coffee.

So don’t go changing your grind size yet, rather drink more coffee if you need a caffeine boost!

The caffeine content in different types of coffee drinks

Here’s a breakdown of the most popular coffee drinks and their caffeine content:

50-100mg of caffeine for a single shot of espresso might not seem like much, especially compared to other brewed coffee. One thing to remember is that a single shot is only 1 oz.

If we drank an 8 oz. cup of espresso (which kind of sounds like a nightmare), we would have consumed almost 800mg of caffeine.

To put that in perspective; for a healthy adult, the FDA has cited 400mg as the healthy daily limit. Any more is dangerous to your health.

If you’re wondering how much caffeine is in a cappuccino, latté, macchiato, etc., the answer is the same. You’re still getting the same amount of caffeine from the espresso shot, the only difference is that you’re adding water and/or milk to it.

Read how to make espresso without a machine.

There are a few different brewing methods and here is the estimated caffeine content for an 8 oz. cup of coffee for each brewing method.

Drip or pour over coffee: There is about 95-145mg of caffeine in a cup of drip coffee.

French Press or Plunger: There is about 80-110mg of caffeine in a cup of French press coffee.

AeroPress: There is about 50-70mg of caffeine in a cup of AeroPress coffee.

Cold brew: There is about 150-240mg of caffeine in a cup of cold brew coffee.

Turkish Coffee: There is about 200mg of caffeine in a cup of Turkish coffee.

The average caffeine content of instant coffee is about 62mg per 8oz. cup.

After decaffeination, there is about 2-7mg of caffeine in a cup of decaf coffee.

You are correct in thinking that decaf coffee shouldn’t have any coffee; it’s in the name, right? Unfortunately, the decaffeination process doesn’t remove all the caffeine from the coffee.

The amount of caffeine in one cup of decaf should be able to go unnoticed in your body. So don’t let this discourage you from drinking one or two cups of decaf towards the end of the day.

What to do next?

Enjoy your caffeine consumption now that you have the information you need. Next, read about how decaf coffee is made. 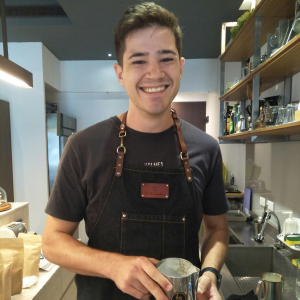 My name is Wynand and I have been obsessed with coffee for many years. I've worked as a head barista and coffee shop manager in the past and I'm excited to share my experience and knowledge with you.

We’ve partnered with an amazing coffee subscription company to get you great offers on delicious, sustainably sourced coffee.

Click the button to be taken to your exclusive discount page.